SPRING in public: SPRING goes into the city

In her novel Serious Sweet British writer A.L. Kennedy lets her protagonist Meg muse on theatre: „Theatres wanted nothing to do with you most of the day and then they lit themselves bright and liked to be all straggled round by dressed-up crowds and queues. Then every trace of that got tidied away, shut in behind doors. And the same crowds were leaving, out again, two or three hours later and you’d no idea what went on in between, except that it made them smug and overheated.“

Meg was not at SPRING. She walked the London Westend, the entertainment district, if you want to put it like that. She was seeing good old theatre with dressing-up and interval and ushers and vanilla ice-cream. She was suspecting that something went on inside, that had nothing to do with her, a dry alcoholic, a jobless outcast of the neoliberalized and overpriced British capital. She sensed a border between her and something that did not want to be bothered by her and that did not want to bother her.

SPRING performs in public space. It always has been, with some remarkable projects. Last year Dries Verhoeven’s Sic transit gloria mundi raised lively discussions. The project, which showed a planned monument about the end of Western hegemony on the Neude, the main square of Utrecht, asked the crucial question about the position of the West in the changed power relations of the world. It asked: could we imagine such a monument? Could we imagine to commemorate our own decline?

It was crucial that the project happened not only in public space, but in the centre of Utrecht, not at the edge in Leidsche Rijn at Berlijn plein (what a name for a place in the periphery), where some want to expel public art to, so that it does not disturb business and cleanliness and the smooth functioning of the profit-machine.

Part of this year’s opening programme is the street performance Transfrontalier by Zora Snake from Cameroon. He makes the borders around Europe visible in the centre of a beautiful old city. To a soundscape of political speeches he confronts us with his body that shifts between torture, pain, glamour and sexiness. The show is a compelling provocation, it gives the effects of European border politics and what used to be called „the refugee crisis“ a physical expression.

Utrecht artist Jeroen van Loon deals in his performative installation Ephemeral Data with an important part of semi-public infrastructure: In a glasshouse on the Neude he and his performers re-construct the glass fibre cable network of Utrecht as a big colourful sand drawing, a mandala, grain by grain, street by street, over the length 10 days, until everything gets swiped away again. It is a meditative and decelerative act, a fascinating slow-motion creative process. We can submit to the internet almost like to a religion, but somewhere there is a physical manifestion, which has been built by hands and which is owned by someone. Is the internet public or private? Its ownership gives power but also responsibility.

Lawrence Malstaff’s high-tech installation Polygon is shown in the shopping-mall Hoog Catharijne. Polygon is a large-scale kinetic structure made out of light-weight tubes, that are connected and permanently move. Their movements seem at times almost animal-like or even human. They evoke the idea that this mechanical construction could be a living thing. In its cool aesthetics it fits into the freshly refurbished, glossy mall, which is full of triggers to shop. But it also adds something human to this temple of consumerism: It is an uncanny presence, which hovers above the shoppers.

Finally SPRING goes into one of the political power centres and landmarks of Utrecht: the Stadskantoor, the new city administration building. For their performance PoroCity the artist duo Andrea Bozic and Julia Willms have collected dreams, which they turned into a narrative. They lead their audience through this remarkable building and place their collection of dreams (and the places they are set in) as a second layer onto the existing architecture. Reality and dream world overlap and interweave. The real space and the imagined space co-exist. What could the utopian (or nightmarish) power of dreaming mean in the central administrative building of our city? Could we welcome the power of dreaming to a place of realism? Not only as a utopian idea, but also as a question-mark to what we regard to be inevitable and fact? Can we make politics and administration porous for a moment in order to create new spaces? Will the human potential to fantasize, will the subconscious sneak in?

I wonder what Meg would say if she got away from the dull Westend idea of theatre to this lively, political and humane approach of theatre and public space? Would she feel less excluded if she experienced a theatre which is also about her world and which comes to her, a theatre talking about digitalisation and refugee politics, about consumerism and humanity, about stress and happiness, not behind closed doors but out in the open? Would she experience stepping into a parallel world and coming out in a different state of mind, not smug and overheated, but moved, surprised, angry, enlightened, startled or delighted? 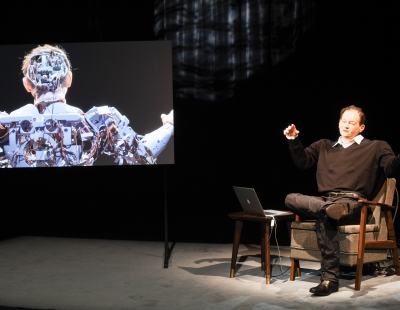 Performing Technology: Welcome in the Uncanny Valley of 2019